SFTP Server in the DMZ or Private Network

any organizations have an SFTP server installed where their trading partners can connect to securely upload and download sensitive files.

SFTP Server in the DMZ

Traditionally SFTP Servers have been installed in the DMZ (or public facing) segment of the network since organizations were fearful of opening inbound ports into the Private (internal) network.

Keeping the SFTP Server in the DMZ, however, has posed several problems. The primary issue is that files have to be stored in the DMZ when they are dropped off by partners, or otherwise staged temporarily for pickup. Those staged files have a higher risk of being accessed by hackers since the DMZ is more exposed to the Internet. You could require those staged files to be encrypted with something like Open PGP, but many auditors don't like to see any sensitive files in the DMZ, encrypted or not. Another issue is that you often have to write scripts to copy the files back and forth between the DMZ and private network, which takes programmer effort and can lead to errors.

SFTP Server in the Private Network

To keep sensitive files out of the DMZ, some organizations have moved their SFTP server into the private network.

An approach that is quickly gaining in popularity is to implement a gateway component in the DMZ. The gateway will serve as an enhanced reverse proxy which does not require inbound ports into the private network.

Since a proprietary control channel is used to communicate between the gateway and the SFTP server, you will need to purchase both components from a single vendor. When looking for the right gateway for your organization, make sure it is easy to set up and manage. It is critical that it does not require inbound ports into the private network or require any data to be stored in the DMZ. 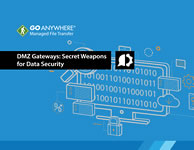 How to Revamp Your Organization's Cybersecurity Program

When cyberattacks and data breaches make the news, it’s usually because they’re at large companies like Facebook or healthcare organizations. But every organization, large or small, needs to be…

Working and collaborating with your team isn’t always a breeze, whether the barrier is different time zones, file sizes, or various copies of the same document. But a content collaboration tool –…

What are Data Silos?

Top 3 IT Strategies for Optimizing Productivity

Little fires everywhere – not just a best-selling novel and new streaming show starring Reese Witherspoon: it’s what most respondents said was the biggest impediment to productivity in their…

How the Coronavirus is Impacting Your Data Security