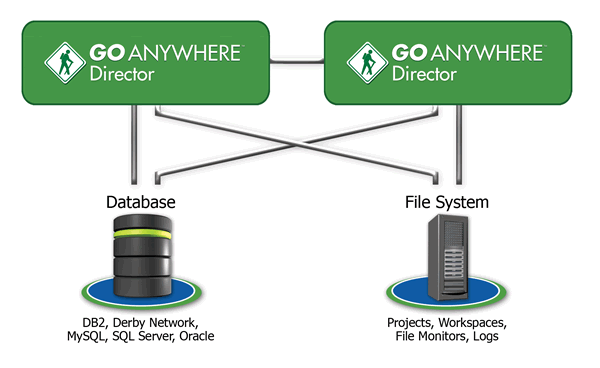 "Many of our customers are using GoAnywhere as a mission-critical application to handle their file transfers," said Bob Luebbe, Linoma Software's [now HelpSystems] Chief Architect. "When those transfers are time sensitive, such as ACH transactions or payroll direct deposits, they can't afford any downtime. Adding clustering to GoAnywhere Director gives these customers and their trading partners peace of mind."

The latest release of GoAnywhere Director included several other enhancements such as the ability to define global variables that can be used inside file transfers to access commonly used values such as company and division codes.

Newly released GoAnywhere Services 3.3.0, which is an enterprise Secure FTP Server, has also benefited from a number of enhancements.

GoAnywhere Services now includes disk quotas and bandwidth throttling.  Disk quotas allow organizations to designate how much space each user is allotted and protects an organization's storage devices from running out of space.  Bandwidth throttling controls the maximum amount of network resources that users can consume while transferring files.  Administrators can set limits on file uploads versus downloads, and can even restrict which days or times of day are available to specific users.

"We've also added at-rest encryption to our Secure Mail module," Luebbe said. "Users have always been able to send files securely via HTTPS, but now we protect those files in an encrypted format while they're stored on the customer's network.  Once those files are accessed by the authorized recipient, they're automatically decrypted and ready to be viewed. It's transparent to the user, while allowing customers to meet strict compliance requirements."

In all, GoAnywhere Director and Services benefitted from more than fifty updates.  A comprehensive list of the newest enhancements can be found on the GoAnywhere website.

Luebbe says that as always, he's grateful to his team of developers for their hard work.

"This was a particularly complex release. We spent many hours planning and testing, and I'm proud of the scope of improvements we were able to make, most in response to requests from our customers," Luebbe said.  "That's what it takes when you want to deliver the best possible experience to your customers."