Linoma Software [now HelpSystems] is pleased to announce the release of a free encryption tool for the desktop that uses the popular Open PGP standard. 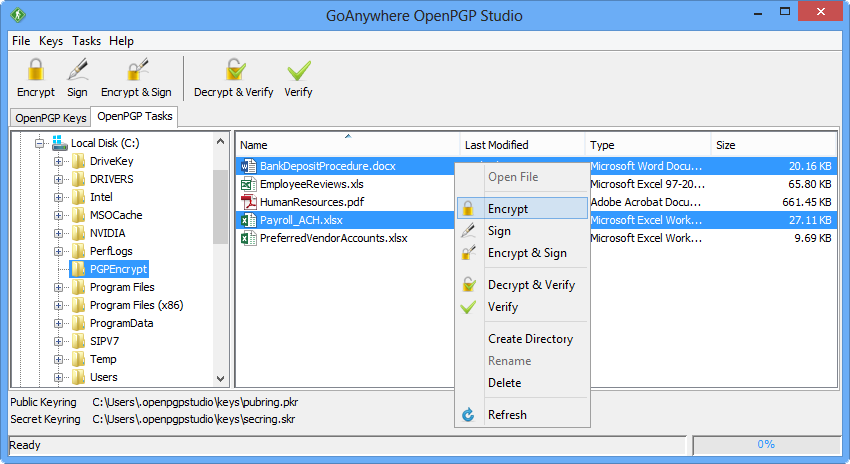 Open PGP, also known as GPG, is a broadly adopted encryption technology for protecting confidential information such as financial and personal information including PII, PCI DSS and PHI data. What sets Open PGP apart from conventional encryption is its asymmetric (dual-key) cryptographic system, which utilizes a combination of public and private keys.

Messages sent to trading partners are encrypted with their unique "public" key, but can only be decrypted with the secret "private" key. This ensures that only authorized users (holding the private key) are able to access the protected data. The public key can be shared with partners using traditional email or FTP since the public key is only used for encryption (it cannot decrypt the data). GoAnywhere Open PGP Studio includes a free key manager that allows you to quickly create, import, export and manage any Open PGP keys needed to encrypt and decrypt files.

"We have supported Open PGP encryption in our enterprise GoAnywhere Managed File Transfer solution for many years," said Bob Luebbe, Chief Architect for Linoma Software [now HelpSystems], "but our customers also needed a simple encryption tool they could use to protect data on their PCs and laptops, as well as with email attachments. GoAnywhere Open PGP Studio addresses this need without costing users a penny."