OpenPGP, PGP, and GPG: What is the difference?

The privacy capabilities of encryption methods such as Pretty Good Privacy (PGP) allow organizations to achieve a hightened amount of data security and protection. There are various approaches and elements of comparison for these encryption methods, however, and each one comes with their own histories, features, and capabilities.

These are: PGP, Open PGP, and GPG.

Need to protect your files in transit? Try Open PGP in your organization, completely free! Get your download today.

Where did PGP originate? The company PGP Inc. owned the rights to the original PGP encryption software that was released in 1991. This software was developed by Phil Zimmermann & Associates, LLC as a way to ensure the security of files that were posted on pre-internet bulletin boards. PGP changed ownership several times between 1997 and 2010 until it was acquired by Symantec Corporation, who continues to develop the PGP brand today. 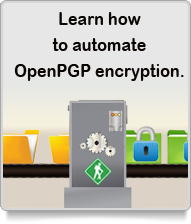 Open PGP is a standard of PGP encryption that is open-source for public use. The term "Open PGP" can be used to describe any program that supports the Open PGP system.

Learn More: Everything You Need to Know about PGP Encryption

Zimmerman, an original developer for PGP, began work in the 1990s on an open-source version of PGP encryption that employed encryption algorithms without licensing issues. In 1997, he submitted an open-source PGP (Open PGP) standards proposal to the Internet Engineering Task Force to allow PGP standards-compliant encryption vendors to provide solutions that were compatible with other Open PGP-compliant software vendors. This strategy created an open and competitive environment for PGP encryption tools to thrive.

A variety of popular solutions have developed their PGP encryption products following the Open PGP standards. Some of these products include GoAnywhere Open PGP Studio and GoAnywhere Managed File Transfer.

GnuPGP, known as GNU Privacy Guard or simply GPG, gives users a GUI for integrating into email and program systems such as Linux. Some software solutions for encryption utilize GPG coding, while others encrypt using command line functions in a menu-based Perl script.

GPG was developed by Werner Koch and released in 1999 as an alternative to Symantec's software suite of encryption tools. It's available as a free software download and is based on the Open PGP encryption standards established by the IETF. This ensures that PGP is interoperable with Symantec's PGP tools, as well as Open PGP standards, and can open and unencrypt any PGP and Open PGP standards file.

Prefer to watch instead of read? Check out this short video!

So, what are the differences between Open PGP, PGP, and GPG?

Open PGP: The IETF-approved standard that describes any encryption technology that uses processes interoperable with PGP.

GPG: Another popular solution that follows the Open PGP standard and provides an interface for users to easily encrypt their files.

As the need to encrypt and protect data becomes ever more critical, organizations will continue to develop software based on these three systems.

Why FTP is an Outdated Method of Security

FTP was designed as an easy mechanism for exchanging files between computers at a time when networks were new and information security was an immature science. In the 1970s, if you wanted to secure a…

What is MFT and How Does It Work?

How to Create a Cybersecurity Policy for Your Organization

The cyberattacks and data breaches that make the news are usually the ones that happen at big corporations like TJX or Home Depot. But every organization, large or small, needs to be concerned about…

No Such Thing as a Free File Transfer, Part I: How MFT Saves Time

Every business engages in some kind of information exchange, whether it’s a small retailer attaching an invoice to an email or a hospital sending hundreds of patient records between departments.…