Was FTP Use Behind the Wikileaks Breach?

November and December 2010 were difficult months for IT security.

Wikileaks began publishing 251,287 leaked United States embassy cables on Sunday November 28th. This was the largest set of confidential documents ever to be released into the public domain. How do security officials believe these documents were originally retrieved by the alleged source, Pfc. Bradley Manning? Many security professionals are wondering if FTP was the software mechanism used.

Also in the news was the security breach at the popular publication Gawker.com. Over the weekend of December 11, Gawker discovered that 1.2 million accounts were compromised, the infrastructure breached, and access to MySQL databases raided. Gawker internal FTP credentials were listed as a part of the breach.

Gawker's problems prompted Social Networking giant LinkedIn to reset the passwords of all users that had Gawker accounts, for fear of contamination by hackers who had gained sensitive profile information.

Smaller national headlines of other breaches included the theft of an undisclosed number of email addresses, birth-dates, and other information by a contractor working for McDonalds.

Also, it was reported that a mailing list was pilfered from the drugstore giant Walgreens. In addition, a leak of law enforcement data was reported by a Mesa County, Colorado.

Finally, a popular Open Source FTP server software application, ProFTPD version 1.3.3c, was distributed containing a malicious backdoor that permits hackers to access FTP credentials. It is thought the attackers took advantage of an un-patched security flaw in the FTP daemon to gain access to the server and exchange distribution files.

What do these various breaches have in common?

The threats may be too diverse to slip into a single category, but the likely culprit is the use of powerful native FTP, without proper, secure management. Once a doorway is left open, native unmanaged FTP access can wreak havoc in any organization.

It doesn't have to be this way. Using a secure file transfer solution like GoAnywhere MFT, which has granular permissions and security controls, along with detailed audit logs and alerts, IT can monitor and better secure and control its data resources.

Regardless of how your organization or your trusted business partners are configured to exchange data, isn't it time to consider a better way to manage your file transfer security?

Secure your data with FTP alternatives 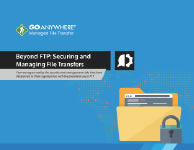 There's no way around it; FTP puts your data at risk. If you need to secure sensitive data, explore FTP alternatives in our white paper, "Beyond FTP: Securing and Managing File Transfers."

Get the White Paper

GoAnywhere MFT is Crucial for Government Agencies Government agencies are facing more responsibilities than ever to keep increasingly sensitive data safe and away from prying eyes. GoAnywhere…