GoAnywhere MFT can interface to your existing applications by providing Tasks to call local programs and commands on the system. These Tasks can be placed within GoAnywhere MFT Projects as part of an overall workflow of processes to perform.

Tasks can be defined in Projects to run commands, scripts and executables on Windows, Linux and UNIX platforms. You have the option to wait for the process to finish before running additional Tasks in the Project, or you can execute the command in batch mode by spawning new processes. You can also set environment variables and pass in arguments to the command or script.

Example of calling a Windows Program

IBM i Commands and Programs

GoAnywhere MFT can call both IBM i commands and programs. When calling a command, you can indicate the command library/name to execute and any message IDs to monitor for. When calling a program, you can indicate the program library/name and its parameter types, lengths and usages (input/output/both).  Constant values or Project variables can be passed into the parameters.

For instance, after retrieving some order files from a FTP server, you may want GoAnywhere MFT to call a program on the IBM i to process those orders.

Example of calling an IBM i program

Example of executing an SSH command 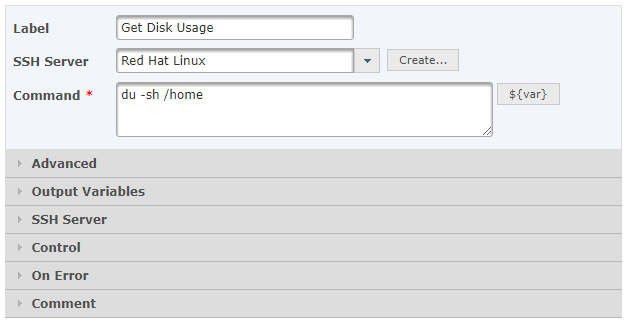 Request a quote to integrate with your existing applications using GoAnywhere MFT.